Amiga Future has 20 years! This magazine is still active. And there is Andreas Magerl, the guy that makes it possible. Let's talk about the past and the future of his business. 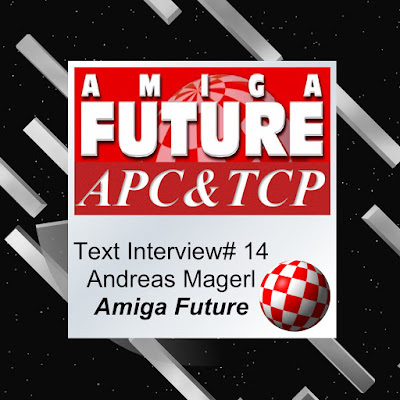 1. Your first contact with computers. And was it Amiga or something else?

My first computer was a Commodore 64. I did not have my Amiga until a few years later.

2. Your first Amiga. Type and configuration? There were some other models too? Which Amiga are you using now?

Since then I have had almost every 68k Amiga once. Some only for a short time.


And of course, Windows PC may not be missing. Unfortunately, some things can only be realized with great difficulty or not at all for me on the Amiga. Since I have to work with computers, there is no way around Windows. Yes, I use an AmigaOne 500 as the main computer.

4. Your inspirations? You have created one of the most famous and the oldest active Amiga magazine - Amiga Future.

Thanks :) But the Amiga Future is not made by me alone. We have a very large editorial office.

The inspiration for the Amiga Future was that 20 years ago, there was no Amiga magazine left, which deals extensively with Amiga games. And in a time in which a lot of games were published.
The big role model for me was the ASM (a German game magazine for all computer systems, which unfortunately has not existed for a long time).
Over time, the Amiga Future has then developed from a game magazine to a magazine around all Amiga topics.

5. How looks a preparation of a new issue of Amiga Future? How looks a timeline for a new number? How many people are behind every issue?

Regularly publishing the Amiga Future sounds much simpler than it is in reality. The first problem is already the regular appearance of the booklet. For example, you have to adhere exactly to the deadline at the printing house. You have to make appointments by mail and of course you have to take into account whether any party is sick or on vacation.
Translators or proofreaders must have the articles in time and also the layouter must not be forgotten.
Somehow you have to do advertising for the magazine. And finally, you have to have the opportunity to sell and mail the magazine.

These are the problems that most "newcomer magazines" fail very fast.

Creating a new edition of the Amiga Future is basically always the same way.

As soon as possible you think about which articles you can bring to the next issue. Naturally, the editors are also asked about their own ideas. Then it's as quick as possible to get the articles ready so the translators and proofreaders can continue working on them.

Before the whole then goes to the layout, the page layout must be created. This is the classification, which article on which page in the magazine comes and how much space is available.

When the layouter has finished the print data, they go to the print shop and it is hoped that the print will work as faithfully as possible.

At first glance, this looks very comfortable. But you must not forget that we have to work simultaneously. That is, while one editor is still writing an article, another article is being translated, another is correcting, and the layouter maybe already could work or rearrange magazine.

Then comes at the last minute an advertiser and you have the whole page plan (as far as possible) change.

Another difficulty is the German / English mode of publication. English words/texts are shorter than German. Nevertheless, they must occupy the same place in the magazine.

6. Amiga Future is for every Amiga user. Is it hard to make one magazine for all flavors of Amiga?

Yes and no. There will always be users who complain that one area is too short. We just try to serve all areas well and give our best. Our goal is to talk about everything around the Amiga. But we are of course limited by the page number of an issue in it.

7. Amiga Future makes some money. But is it enough? Is financial future secure enough for next 20 years?

So the future for the Amiga Future, as it is right now, is absolutely safe!

But we would like to do more. For example, more pages per issue, an even graver homepage or simply more trade fair appearances.
At the moment we are lacking the money. For this we needed more subscribers and advertisers.

8. Last years are better for Amiga fans.  After so big time, Amiga Future has now a competitor Amiga User. Is there a place for two (or more?) printed magazines?

The Amiga Future is not comparable to the Amiga User. The Amiga Future deals a lot with current reviews. Of course, we also have specials or workshops like the magazine Amiga User. But that only makes up a very small part of the magazine.
And the Amiga Future appears regularly every two months.
We also try to accommodate as much content as possible in one issue. That's why we do not have any overprints and screenshots in the magazine. For example, we have over 5000 till 6000 characters per page. There was hardly an Amiga magazine that had so much text on one page. The editorial, table of contents and imprint are published on a single page. Other magazines need three pages for this.

Personally, I do not see the slightest problem that there is another Amiga magazine. There are certainly people who have problems with us. But we've gotten used to it by now.

9. What do you think about PowerPC in Classic Amiga, Next Generation, and Vampire / FPGA technology?

To upgrade a Classic Amiga with PPC I think is very worthy of discussion. I would not do it. Better to buy an NG computer.
But especially the Vampire development fascinates me. I am very curious what will happen next. These developers are very interesting.

10. What do you think about Amiga NG? Is still a good time to have a new future in a modern way? Or we are back to good old classic AmigaOS 3.1?

Amiga has basically split into two parts. Classic Amiga (68k) and NG Amiga (PPC).
However, I do not see the slightest problems. Both areas can live very well together and cooperate.

11. Should our developers try to sell apps/games to get some cash for a hobby? In my opinion yes. What do you think about this?

APC & TCP has been selling Amiga software, merchandising and the Amiga Future for more than 25 years. Some things even without earning anything at all.
It is becoming increasingly difficult for a developer to sell his software due to the legal situation. That's why we also have large audiences with us.

The customers have to decide that. :)

But maybe, the existence of APC & TCP over 25 years and the Amiga Future over 20 years.

13. Amiga Future is available in German and English. Do you think there is a place for other languages in a printed form?

At the moment we want to increase the German and English edition. If that works, it makes our job much easier.

In theory, it would of course be possible to publish the Amiga Future in other languages as well. But in order to realize that, you would need a sufficient number of good translators and hundreds of subscribers. Currently I think that is unrealistic.

14. Have you thought about a digital version of new issues? There are possibilities like: PDF format, Amazon Kindle or AMIStore shop.

Yes, of course, we have thought about it. Therefore, there is also the Amiga Future News App for Android in the Play Store. Just to check the possibilities.

But basically it is so that we want to make a print magazine. And we want to continue that. A PDF variant could create the problem that the number of readers for the print edition is too low and then had to be discontinued at some point.

So currently a PDF version of the Amiga Future is not planned. If the print edition reaches a certain height, we will think again.

15. In this divided situation how we should develop software? For example, MUI is different for AmigaOS and MorphOS, AROS has Zune. Maybe we should have one core team for MUI/Odyssey etc., and then port software for three main systems?

It is not nearly as complicated as it likes to be. First, the developers should finally get away from the way the Classic Amiga, NG, MorphOS and AROS competing systems, who have to work against each other. Just work together, then all other obstacles disappear with time.

16. You are present on different shows, not only Amiga ones. Do you think we should propagate Amiga out of our Amiga world?

Yes, I think that is very important. For example, we will be represented again at Gamescom this year. That costs us a lot of money though, but at such events can be reached new and especially many former Amiga users that you can inspire for the Amiga.

17. Amiga Future is a magazine. There is even a news app for AmigaOS. Are you planning to join YouTube or similar social media channels?

Yes, we plan. But at the moment we just do not have the manpower.
Currently we are still looking for our webpage active reinforcement. For example, we want to expand the news and download area. For this purpose, we are currently looking for editors.
We also want to expand our presence on Google+ as well as on Facebook. For this we are still looking for an editor who cares about Google+. Then we think about whether we can also use Instagram.
And of course, we were also very interested in Youtube. But we also needed people who regularly cared for it.

The advantage of social media is that you can also win new Amiga users there.

18. The community is waiting for a Tabor. Even Classic users or MorphOS users are interested. Do you plan to buy one? Could it be a turning point for future of Amiga?

Personally, I simply have no money for new hardware. : /

Whether the Tabor is a turning point? Turning point of what? I'm not really of the opinion that there is a bad time for the Amiga. It just likes to talk bad and some just have too high expectations of the Amiga market.

19. For newcomers. What Amiga can you advise? Classic or maybe NG? Or an emulator?

For beginners, I always recommend an emulator. Then you can look at the system for little money, make contacts with the Amiga Community and if you like it you can get the right Amiga hardware.

20. Our future? Community and future of Amiga? We are getting older, is there any chance to put Amiga in more usable form?

The most important thing is that the users understand that the Amiga will never be number one. She does not have to be. Amiga is a wonderful hobby-computer... it's incredibly fun... there is a big friendly community and, and, and...
All things you should once enjoy instead whining what's going wrong.
And there are also plenty of opportunities to actively participate in the community. For example, we are still looking for reinforcements in many areas. :)

Until next time. :) And just have fun with your Amiga. :)