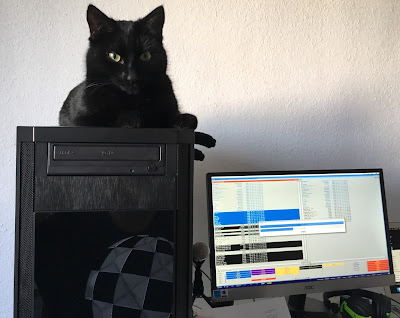 Many were waiting for the day when new and strong Amiga(One) will appear. That happened now. Currently, the X5000 can be purchased with the dual-core processor. In the future, a more powerful machine will be available. Is it worth buying the current model or wait for a four-core version?
There is also a podcast episode with a new and fresh Amiga user. It's really rare because his first Amiga is AmigaOne X5000. Take a look at Episode 22.

If you are interested in the latest version of AmigaOS (4.1 Final Edition) and at the same time, you would like to have the most efficient hardware, dual-core X5000 can be a good choice. After shifts and delays, it turns out that this computer is quite powerful, especially, when we consider the price of the complete setup. It's far more attractive than the previous model - AmigaOne X1000. We are talking about costs of 2300 (instead of 3000) Euro, along with software package from A-EON Technology Ltd. Depends also on selected distributor, the buyer could get additional software (added by a shop itself). This idea fits in the 90s of last century. At that time, you could buy some Amiga model in such sets as Magic Pack, or revolutionary in these years - Batman Pack. Definitely a good move. At such a significant expense, it is nice to get more than a just computer. 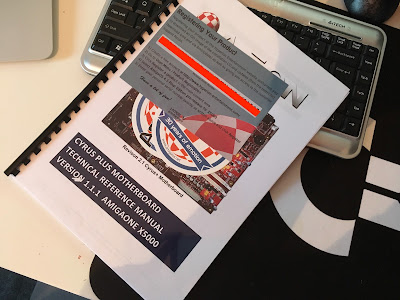 In recent months, my X5000 has been used quite intensively. The reason for this was the intense work on the new book AmigaOS 4 every day. As the name implies, the main purpose of the publication is to describe the usage of AmigaOS 4.1 as the main system in typical tasks of the present day. For impatiently I can safely say that the dual core processor (P5020) with 2.0 GHz adds to Amiga (big) wings. A lot of problems noticeable on slower systems (like G4 machines), here are not existing. New CPU give a great power injection. Even software bottlenecks (eg lack of JIT in JavaScript for Odyssey browser) are less problematic (or disappears), because of CPU performance. Although not only processor matters. The motherboard provides fast DDR3 memory, PCI-Express slots, modern graphics cards, or SATA interface with fast SSD drives. If only the system (and programs) would use dual-cores, it would be even better. Of course, such plans have been around for a long time. However, when it will be a fact? It's hard to say. After all, when yes, this computer will gain additional advantages. 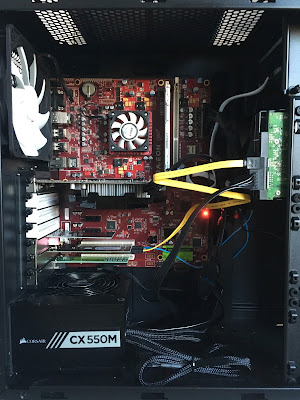 During purchase, we can decide whether we want to buy only a motherboard or complete system. I decided the second option is better because it's more comfortable for me. In addition, the computer is mounted in a Fractal Design 3300 tower with custom front cover - an engraved panel with Amiga Boing logo. Equipment and hardware are configured. Even AmigaOS is preinstalled with all necessary drivers. But in my opinion, it can be treated only as an example. Partition setup is not optimal, so it is best to set it up from scratch. Not all childhood illnesses have been eliminated. In my case, I had to connect the front USB to the motherboard by myself. Probably it comes from a reason that I was one of the first customers. Now, it should be better. Well, the Amiga world isn't perfect. Another, more important problem was a CMI (8738) music card. A lot of music cards with ASM1083 chip have a revision that causes complete computer suspension. Furthermore, this problem affects every operating system! For Amiga, it was solved pretty quickly by shops. They have exchanged music card for those with the correct chipset. Of course, the procedure is free and the client doesn't need to return a problematic version of your card. Despite all that, it's quite a lot inattention and an inexperienced user may feel quite surprised. However, is hard to directly blame A-EON or Hyperion, but this doesn't change the fact that this problem should be caught during such a long development cycle of tests. It shows that something is wrong with Hyperion's beta testers... but it also shows that (attempt to) the jump from PPC to Intel for AmigaOS is a rather risky task. Plans might be for nothing, because of a change in even one chip on a motherboard. 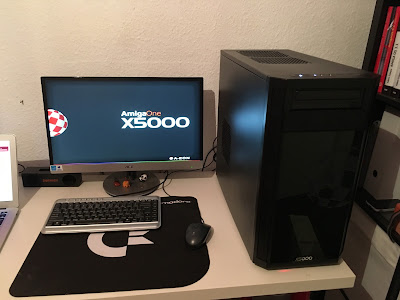 Let's continue the technical thread. It is worth mentioning that the computer is equipped with: 4 GB of RAM (currently an optimal option for AmigaOS), graphics card, compatible with Warp 3D Nova (and with "old" Warp 3D) such as Radeon HD R7 250X (depending on the store). On the other hand, a major drawback may be only two SATA ports and USB 2.0. As far as, the disk controller is concerned, just buy the right one  SATA PCI card (eg based on SIL 3512), in the case USB connectors, standard 3.x has become something normal now and replaced completely predecessor. Unfortunately, AmigaOS does not support USB 3.x. So even buying an additional card for the present moment will bring nothing. Nevertheless, we have 6x USB ports on the back and 2x on the front of the chassis. The tower presents herself perfectly. It is neither too heavy nor too lightweight. We have a lot of space and is equipped with a good quality power supply. System cooling is good, but of course, we can't expect 100% of silence. Generally, FractalTower is equipped with quality components, so it is (certain) justification for such a high price for a completely set. But remember: this is an average of about 700 Euro less than the AmigaOne X1000 at the time of its release. Or else ... it is more or less the same price like over twenty years old Amiga 4000 with CyberStorm PPC card. Amiga 4000 and AmigaOne X5000 are able to run the latest AmigaOS 4.1, however, on an old Amiga, it will be almost unusable.
The software that every customer receives is AmigaOS 4.1 Final Edition Pre-release for the X5000 (the equivalent of the AmigaOS 4.1 Final Edition Update 1). As its name implies, it's not fully finished version. This means the ISO file should be downloaded from Hyperion's website and you must record your own CD or DVD. Of course, when the development is done, a user will get full AmigaOS 4.1, without having to pay extra money. In spite of all, the current version is quite clear and well-written. There should be no problems with AmigaOS. Personally, I was expecting a state closer to beta, but it's much better. Only problems I've noticed are disappearances the DVD drive after a soft reset (the problem is known program) and random problems with the keyboard. Sometimes if you press (any) key it's recognized like many presses of same keys. If something like this happens, perform a soft reset and after reloading the AmigaOS keyboard will work properly. This is a rather sporadic affair, but after so long development such defects shouldn't be present.
Also, there is some kind of bug in NGFileSystem. It looks like in some case with SQL database files could be corrupted. For end user there is two option: make a backup of SQL files (like cookies.db from Odyssey) or install problematic software on SFS or FFS partition. The problem is known for Hyperion, so it should be resolved soon.
As you can see, Hyperion rightly choose the nickname Pre-release for this version of AmigaOS. 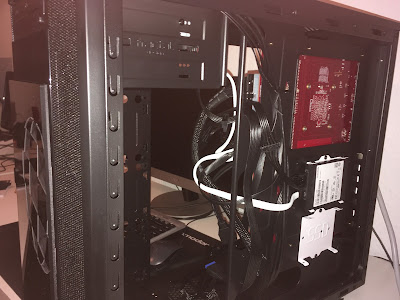 Computer's pack have also the Enhancer Software Plus and Personal Paint. Both on CD. Undoubtedly, especially this first package, along with Warp 3D Nova and Radeon HD drivers are nice to have! Here, is worth to mention, that the latest Warp 3D Nova isn't the same as (old) Warp 3D. So if we want to use software written under the older Warp 3D (and this is now absolutely lion's share of the games and programs), you have to buy Warp 3D - separately from AMIStore. Alternatively, you can take advantage of the Wazp3D software solution (but it's slow and not recommended). As you can see, this cause confusion (for people less oriented in Amiga). All answers, of course, can be found on the internet, but it shouldn't be like this. Unfortunately, one of the biggest disadvantages of the X5000 is manual, or lack of it! Even the so-called quickstart is missing! Another (hardware) problem is, that front panel headphone input is not connected. And microphone as well. First of all, this is because (now) standard is HD Audio. AmigaOS (yet) doesn't support it. That's why the computer is equipped with extra music card. It shows, that lack of instruction, in my opinion, is a big mistake. The user gets a bad feeling and it shows, that system or distribution is not ready for sell. But, still, if we compare it to top classic Amiga configuration, X5000 problems are a piece of cake. With new, quite modern hardware, we don't neet to solder, replace capacitors or patch the operating system. Buyer will have new hardware with a guarantee and technical support (mentioned card music problem).
Impressions from usability. The computer as a whole thing is so good, that all problems and disadvantages are disappearing. As I mentioned (at the beginning) I decided that X5000 will be not only my main Amiga, it would be my main computer for every day. The daily intensive work on the X5000 and experience from my previously system (based on Pegasos II G4), shows it could be true. Of course, (please) look through the prism of the Amiga. We can't directly relate the latest AmigaOne to a current PCs or Macs. Despite all that, thanks to a more powerful processor, 2 GB of RAM for the system (and separate 2 GB for Ram Disk) computer can handle easily typical task: the internet or even preparing clips for YouTube. Certainly, it's not the level of the latest Intel i7 processors, but for daily use, it's enough. Nevertheless, there are two software problems. Not from today, we know that one of the biggest problems of Amiga is an outdated browser (Odyssey). Despite all that, Odyssey is surprisingly good (including Gmail support, banks, YouTube or Facebook). Although the previously mentioned JIT in JS is slowing down everything. The second case is FullHD movies. Practically it's impossible to play them without loss of FPS. The problem isn't AmigaOne itself, but graphics card drivers. Although it's planned to be changed, it's a little bit funny that we can't play FullHD videos. Hello, developers? Now it's time for 4K movies! So, if only Odyssey gets a new engine, and AmigaOS will get support for hardware decoding of FullHD, the investment of 2300 Euros can be somehow excused. However, since you read these words, I think it is worth to consider to buy a new hardware. It will be always better, than old and inefficient retro machine. Because AmigaOS 4 has the integration with RunInUAE for old compatibility games (software) and has a reserve of power and continuous (despite slowness) software development it's possible to use (in most of the task) X5000 as a typical computer. This could be a solution for people who want to use the latest AmigaOS and have a passion for retro titles. Or they like the atmosphere of this operating system, and they do not want to resign from modern technology. 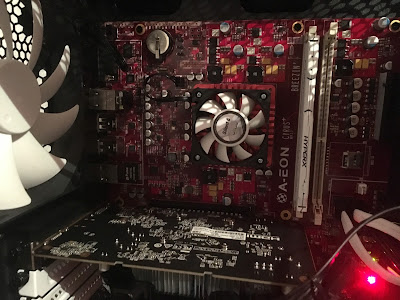 As you can see, this text isn't an AmigaOne X5000 benchmark. It's a simple review, after intensive use of this computer. Personally, I am very happy with the fact that I can easily use AmigaOS in typical everyday tasks. It gives a lot of fun. From my point of view, the X5000 is the best Amiga ever made. It's worth spending the money. You can use (quite) modern solutions and have a retro/Amiga feeling. But be aware of limitations! AmigaOS isn't the most advanced operating system. Let's have a hope, that some problems, mentioned above, soon will be the past.