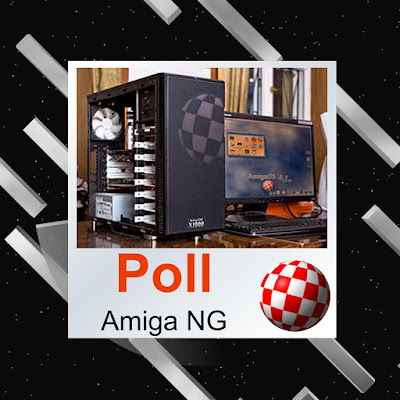 The only first question is a single choice, all of the rest are multiple choice. This means you can select one or more answers for every question (apart from the first question). There are 15 questions for you to answer. After the survey is finished I will publish result exactly here - the same entry on the blog.

The results of the poll for Classic Amiga is here: http://www.amigapodcast.com/2016/08/poll-usage-of-classic-amiga.html.

Your main operating system / most used is - 452 Votes

In near future, would you like to see/have - 403 Votes

Should next generation AmigaNG be - 321 Votes

How much should cost new complete computer - 329 Votes

How much average program/game should cost - 335 Votes

As you see the poll was not so perfect. Prepared by me... for the first time. But I think it will show how we use NG Amiga. I have hope, that it can be also useful for our developers and hardware manufacturers. And at the end, the most active part of Amiga World is Europe. The maximum number per question of votes 758 and maximum 452 voters.